Web PaaS allows you to define the routes used in your environments.

A route describes how an incoming HTTP request is going to be processed by Web PaaS. The routes are defined using the .platform/routes.yaml file in your Git repository.

If you don't have one, use the commands below to create it: 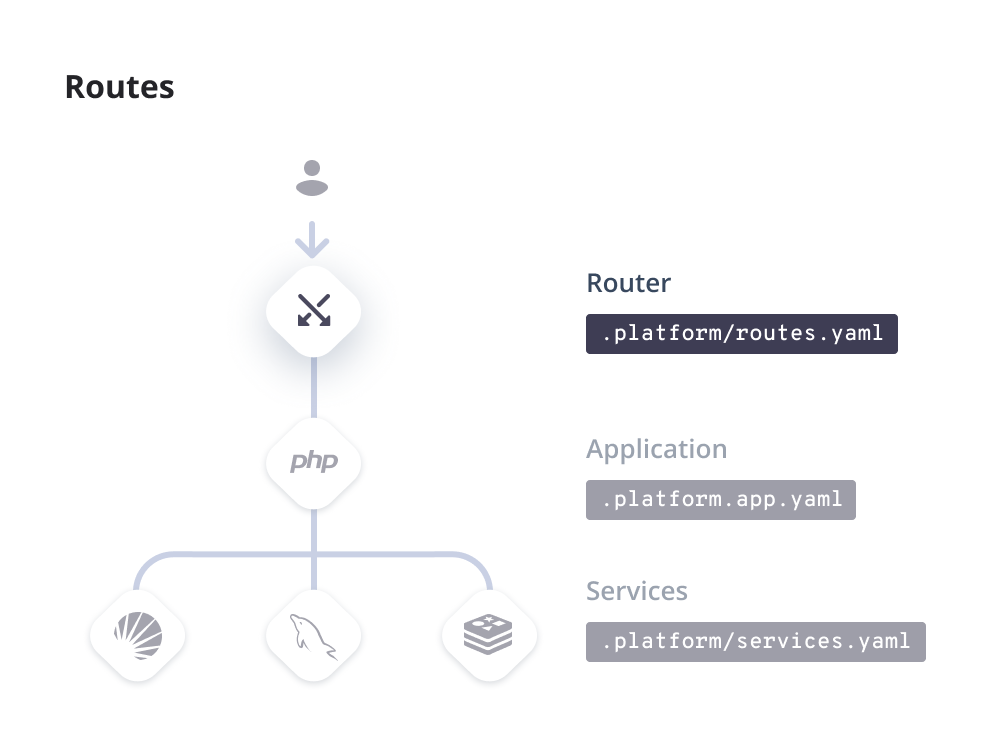 The YAML file is composed of a list of routes and their configuration. A route can either be an absolute URL or a URL template that looks like: http://www.{default}/ or https://{default}/blog where {default} will be substituted by the default fully qualified domain name configured in the project. So if your default domain is example.com, these routes will be resolved to http://www.example.com/ and https://example.com/blog in the master environment.

Web PaaS will also generate a domain for every active development environment. It will receive a domain name based on the region, project ID, branch name, and a per-environment random string. The domain name itself is not guaranteed stable, although the pattern is consistent.

Each route can be configured separately. It has the following properties 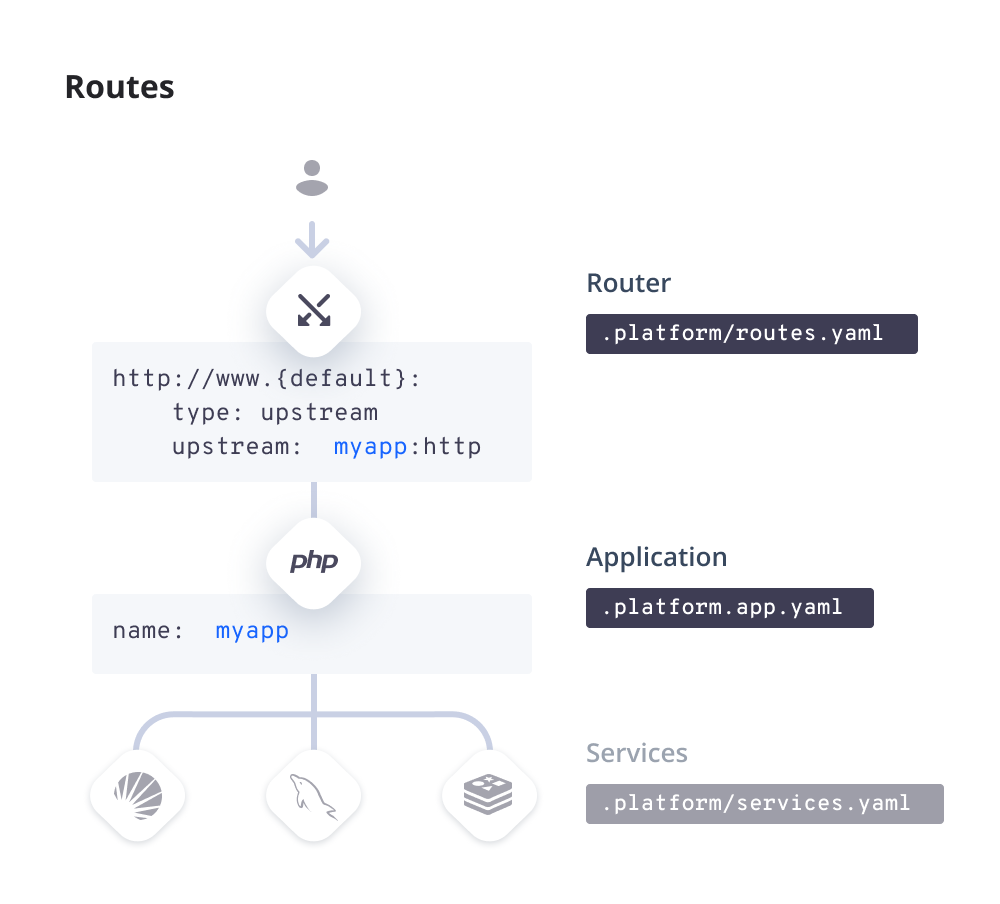 For the moment, the value of upstream is always in the form: <application-name>:http. <application-name> is the name defined in .platform.app.yaml file. :php is a deprecated application endpoint; use :http instead. In the future, Web PaaS will support multiple endpoints per application.

The full list of generated route information is often much larger than what is literally specified in the routes.yaml file. For example, by default all HTTPS routes will be duplicated to create an HTTP redirect route. Also, the {all} placeholder will create two routes (one HTTP, one HTTPS) for each domain that is configured.

As a general rule we recommend keeping the defined routes under 100. Should you find your routes.yaml file rejected due to an excessive size the best alternative is to move any redirect routes to the application rather than relying on the router, or collapsing them into a regular expression-based redirect within a route definition.

Let's Encrypt also limits an environment to 100 configured domains. If you try to add more than that some of them will fail to get an SSL certificate.

Here is an example of a basic .platform/routes.yaml file:

In the following example, we are not redirecting from the www subdomain to the apex domain but serving from both:

You can configure any number of domains on a project when you are ready to make it live. Only one of them may be set as the "default" domain. In the routes.yaml file a route can be defined either literally or using one of two special placeholders: {default} and {all}.

The magic value {all} will be replaced by all of the domain names configured on the account. That is, if two domains example1.com and example2.com are configured, then a route named https://www.{all}/ will result in two routes in production: https://www.example1.com and https://www.example2.com. That can be useful in cases when a single application is serving two different websites simultaneously. In a non-production branch it will be replaced with the project ID and environment ID for each domain, in the same fashion as a static route below.

If there are no domains defined on a project (as is typical in development before launch) then the {all} placeholder will behave exactly like the {default} placeholder.

It's also entirely possible to use an absolute URL in the route. In that case, it will be used as-is in a production environment. On a development environment it will be mangled to include the project ID and environment name. For example:

If your project involves only a single apex domain with one app or multiple apps under subdomains, it's generally best to use the {default} placeholder. If you are running multiple applications on different apex domains then you will need to use a static domain for all but one of them.

All routes defined for an environment are available to the application in its PLATFORM_ROUTES environment variable, which contains a base64-encoded JSON object. This object can be parsed by the language of your choice to give your application access to the generated routes.

When routes are generated, all placeholders will be replaced with appropriate domains names, and depending on your configuration, additional route entries may be generated (e.g. automatic HTTP to HTTPS redirects). To make it easier to locate routes in a standardized fashion, you may specify an id key on each route which remains stable across environments. You may also specify a single route as primary, which will cause it to be highlighted in the web management console but will have no impact on the runtime environment.

This example defines two routes, on two separate subdomains, pointing at two separate app containers. (However, they could just as easily be pointing at the same container for our purposes). On a branch named test, the JSON object that would be base64-encoded in the PLATFORM_ROUTES environment variable would look like this:

(Some keys omitted for space.) Note that the site2 HTTPS route has an id specified as the-second while other routes have no ID. Futhermore, because we did not specify a primary route, the first non-redirect route defined is marked as the primary route by default. In each case, the original_url specified in the configuration file is accessible if desired.

That makes it straightforward to look up the domain of a particular route, given its id, regardless of what branch it's on, from within application code. That could be used, for example, for specifically allowing inbound requests.

Route attributes are an arbitrary key/value pair attached to a route. This metadata does not have any impact on Web PaaS, but will be available in the route definition structure in $PLATFORM_ROUTES.

Attributes will appear in the routes data like so:

These extra attributes may be used to "tag" routes in more complex scenarios that can then be read by your application.

You can get a list of the configured routes of an environment by running webpaas environment:routes. 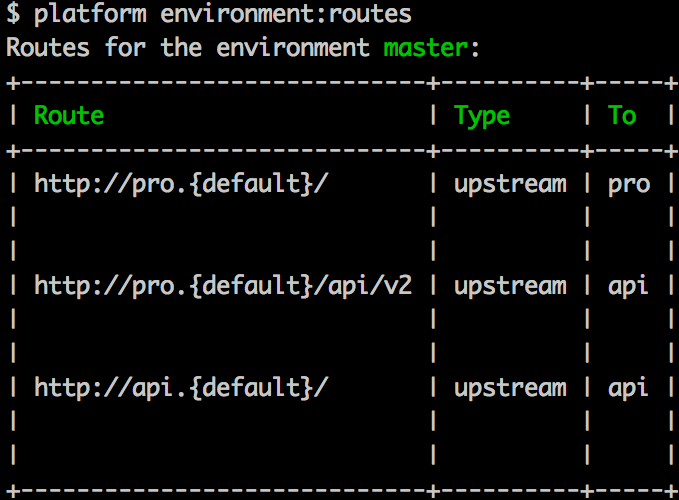 If you need to see more detailed info, such as cache and ssi, use webpaas route:get

Web PaaS supports wildcard routes, so you can map multiple subdomains to the same application. This works both for redirect and upstream routes. You can simply prefix the route with a star (*), for example *.example.com, and HTTP request to www.example.com, blog.example.com, us.example.com will all get routed to the same endpoint.

For your master environment, this would function as a catch-all domain once you added the parent domain to the project settings.

For development environments, we will also be able to handle this. Here is how:

Be aware, however, that we do not support Let's Encrypt wildcard certificates (they would need DNS validation). That means if you want to use a wildcard route and protect it with HTTPS you will need to provide a custom TLS certificate

In projects created before November 2017 the . in subdomains was replaced with a triple dash (---). It was switched to preserve . to simplify SSL handling and improve support for longer domains. If your project was created before November 2017 then it will still use --- to the left of the environment name. If you wish to switch to dotted-domains please file a support ticket and we can do that for you. Be aware that doing so may change the domain name that your production domain name should CNAME to.

To use WebSocket on a route, cache must be disabled because WebSocket is incompatible with buffering, which is a requirement of caching on our router. Here is an example to define a route that serves WebSocket:

You will also need to disable request buffering in the .platform.app.yaml.

In accordance with the 2006/112/CE Directive, modified on 01/01/2015, prices incl. VAT may vary according to the customer's country of residence
(by default, the prices displayed are inclusive of the UK VAT in force).