Web PaaS supports building multiple applications per project (for example RESTful web services with a front-end, or a main website and a blog). For resource allocation reasons, however, that is not supported on Standard plan.

This page only applies to Grid projects.

There are multiple ways to structure such a project, depending on the way your source code is organized and what your goal is. All of these approaches may be used within a single project simultaneously, although it is often easier to maintain if you settle on just one approach for a given project. 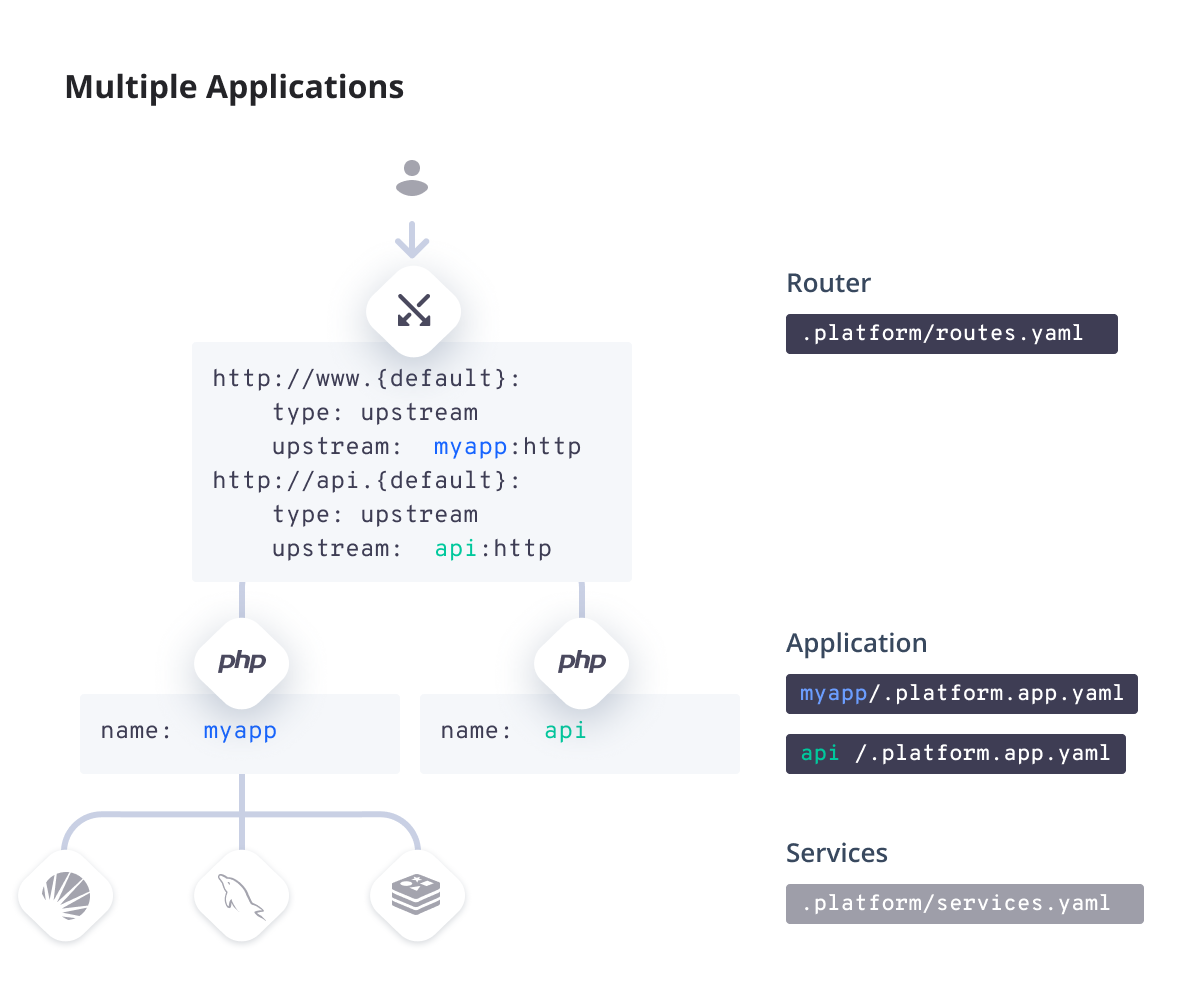 If your project consists of a discrete code base for each application, the most straightforward approach is to put both code bases into a single project repository in separate directories. Each will have its own .platform.app.yaml file, which will define how that particular application gets built, using the code in that directory.

For example, if you have a Drupal back end with an AngularJS front end you could organize the repository like this:

Each .platform.app.yaml file will define a single application container, and build code in that directory. The .platform directory is outside of all of them and still defines additional services you require, as well as routes.

Note that disk paths in the .platform.app.yaml file are relative to the directory where that file lives by default.

This is the recommended approach for most configurations.

The primary use case for this configuration is if the source code is pulled in as a Git submodule or downloaded during the build phase.

Web PaaS supports Git submodules, so each application can be in a separate repository. However, there is currently a notable limitation: the .platform.app.yaml files must be in the top-level repository. That means the project must be structured like this:

Every application, however it is defined, must have a unique name property. The routes.yaml file may then refer to that application by name as an upstream for whatever route is appropriate.

For example, assuming this configuration from above:

(This assumes your Drupal application is named drupal and your Angular front-end is named angular.)

Assuming a domain name of example.com, that will result in:

There is no requirement that an application be web-accessible. If it is not specified in routes.yaml then it will not be web-accessible at all. However, if you are building a non-routable application off of the same code base as another application, you should probably consider defining it as a worker instead. The net result is the same but it is much easier to manage.

In a multi-app configuration, applications by default cannot access each other. However, they may declare a relationships block entry that references another application rather than a service. In that case the endpoint is http.

You have 2 applications, app1 and app2. app1 wants to connect to app2 (for instance, if app2 is a backend data API service). In app1/.platform.app.yaml you would make a relationship to app2 like so:

Like all other relationships, app2 will not be available to app1 until after the build process has completed.

Note the http. The relationship is created within the internal network over port 80. HTTPS is not supported.

In accordance with the 2006/112/CE Directive, modified on 01/01/2015, prices exclude VAT. VAT may vary according to the customer's country of residence.